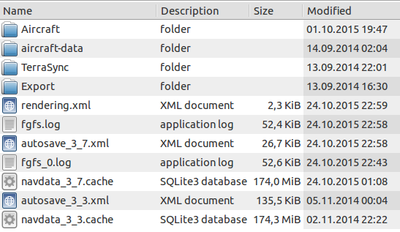 In $FG_HOME is information stored between sessions. That information is foe example configuration/preferences, properties marked with the user-archive attribute and aircraft-specific settings (using the data helper class in aircraft.nas). $FG_HOME is also the location for the SQLite-based NavDB cache.

If you want/need to refer to any of these files frequently, you could make an alias of a file, or the whole folder, and place it somewhere easier to access. TerraSync data is also stored inside the user's home folder, as it is the only location we are permitted to write too, $HOME/Library/Application Support/FlightGear, which technically is the value of $FG_HOME.

The OS X launcher doesn't actually set this path (any more), this location is the default used by FlightGear itself. You can of course override these paths and set $FG_HOME or the TerraSync path manually, from the command line or a configuration file, but the default paths should do what you need.

As one user once said, "When in doubt delete $FG_HOME". Many problems, including corrupted databases, broken TerraSync and many others can be fixed by deleting fgfs_0.txt, fgfs.txt, terrasync_cache, and the Navaids database.