I started to implement a Garmin GNS-530 since I felt that we were missing some kind of panel-mount IFR GPS for GA aircraft. The GPSMap 196, while a nice effort, is a handheld device that is oriented more towards VFR pilots. I don't know what the status of the Bendix/King KLN-89b is, but it would be quite a 90's choice anyway.

The GNS-530 and its slightly smaller sibling, the GNS-430 were among the most popular panel mount GPS from their introduction in 1998 throughout the first decade of the millenium. While they have recently been superseded as Garmin's flagships by the new GTN-750/GTN-650, the GNS-530 is still one of the most common primary IFR GPS in well equipped piston aircraft, and will probably remain so for many years to come. I also decided to model the older device, since the newer GTN-750/GTN-650 series features touch-screen operation which I personally strongly dislike.

I'm trying to model the basic functionality and behaviour as close as possible to the real device. Pilots acquainted with the GNS-530 should find it easy to use the model the same way they use their real devices. I'll probably not fully implement all possibilities of customization, though. The information displayed in the four corners of the DefaultNav and Map pages, for example, will always be according to the real GNS-530 factory setting, which most Pilots don't touch anyway.

For Pilots new to the GNS-530 I'll post a basic manual at the bottom of this page. You will get more information by looking at the Manual of the GNS-530 available online from Garmin

Very much work in progress.

Still, at its present state, the model can be used as the primary COM/NAV frontend, and it will serve as a basic navigational device looking good in the cockpit :D

How to try it out

The Garmin GNS530 is basically split into two parts. The left 30% of the device are mostly dedicated to a COM/NAV (COMM/VLOC in the Garmin sources) unit, while the right 70% are almost equivalent with a Garmin GPS500 standalone GPS. 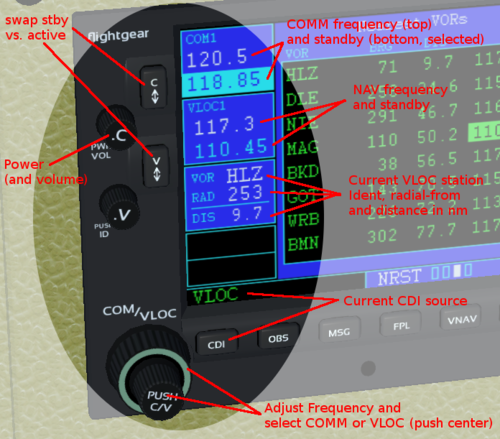 This works like most COM/NAV units have for years. The rotary encoders at the bottom left change the standby frequency of the selected part (COMM or VLOC). The outer ring changes the MHz and the inner knob changes the kHz. Pressing the inner knob switches the selection (cyan marker behind respective standby frequency) between COMM and VLOC. The two push-buttons on the left swaps the standby frequency that has been adjusted by the pilot with the active frequency. Below the COMM and VLOC frequency displays there is a third field that displays the ID of the active VLOC station, if, and only if it is in range, as well as the radial from the station and a kind of DME distance (AFAIK there is no real DME receiver in the GNS530, the distance is calculated from the gps position and the station data in the nav database). Finally, at the left end of the row of push-buttons below the screen, there is the [CDI] button which selects the current source for the external CDI (HSI, EHSI, and in many cases also of the autopilot's NAV mode). The currently active CDI source, the GPS or the integrated VLOC receiver, is displayed right above the button in the bottom left corner of the display.