The development is currently happening at FG-Haptic on Gitorious. It is tested on Linux only, as the author (Zan) has no build environment on Windows. Testers wanted!

No built modules yet available. Only source code and nasal/xml scripts. Requires SDL 2.0 to function (might also work with 1.3 or later, but is tested with 2.0).

Installation and how to use 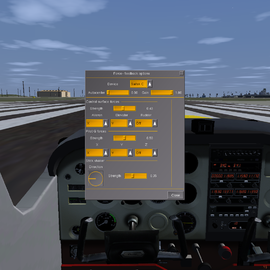 All properties used by fg-haptic currently reside under /haptic/. All effects are directly under that (like stick-force/) and each device is below /haptic/device[X]/, showing device info and configuration.

Stick forces are based on the following equation, which represents force caused by air flowing towards a surface:
F=0.5*airspeed^2*density*area*Cd, where Cd is drag coefficient and area is perpendicular to airflow.

Since the surfaces can turn, the effective area is:
effective_area=area*sin(angle), where angle is the deflection angle, and it should take angle of attack into account:
angle=deflection_angle-AoA, since that is the real direction of air flow with relation to the surface. For rudder, we use slip angle instead of AoA.

Also slip may be taken into account, if the air flows from side, it has less effect on the surface, thus giving:
effective_area_2=effective_area*(1-sin(slip_angle)).

Another thing we take into account is stall and deep stall. If AoA is over the stall limit, or over deep stall limit, forces acting on elevator and aileron are quickly ramped to zero, representing separated airflow.

In this implementation, multiplication by 0.5, Cd and area are combined to a single coefficient for aileron, elevator and rudder, that are aircraft specific. Coefficients should be set so that the force does not exceed 1.0 (maximum value) in normal operation, and they can also be set to 0 or other value to represent fly-by-wire systems. Also slip coefficients can be defined to fine tune the stick feeling. A good starting value to try for each coefficient is:
coeff=1.0/((Vne^2)*sin(max_deflection)*0.00257), where Vne is the maximum (never exceed) speed in knots, max deflection is the maximum deflection of the control surface and 0.00257 is standard air density (slugs/ft3). This value can then be fine tuned.