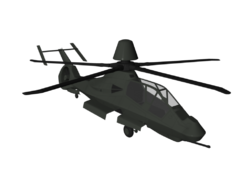 To claim the basic bounty, the developer must present a complete and working RAH-66 Comanche aircraft.

A functional cannon and functional hardpoints for missiles including compatibility with Bombable qualify for the additional bounty.

Amendment (2012-01-06, sgofferj): The cannon should be positioned via 2 properties in the property tree which should describe the azimuth and elevation angle and which values should be -180° - 180°, reflected by the values -1.0 - 1.0 for easy control with joystick axes or HeadTrackNoIR. Though the possible values should reach from -180° - 180°, the movement of the cannon should be restricted to the "real" values.

Notice: This bounty is split in parts. The full bounty can only be claimed if all parts are fulfilled.

Special notice: You're free to continue the development of pjedvaj's Boeing-Sikorsky RAH-66 Comanche to fully claim the bounty.

sgofferj (maintainer) - US$15 for the basic aircraft, US$5 for functioning weapon systems - payable via PayPal - stefan DOT gofferje AT gmx DOT de